If someone were to inform me that there is a brand that manufactures a tastier, more macro-friendly, and healthier ice cream alternative than Halo Top, I would have been punched in the face. Well, in a good way, the type where you experience some kind of revelation afterwards. But definitely avoid ANY situation where you can get punched in the face AND refrain from punching anyone else in the face. Unless if you find it necessary.

ANYWAYS, back to the ice cream subject. When anyone thinks of low calorie ice cream, they think of tasteless and of lesser substance. But when anyone thinks of “no sugar added” or “sugar free” ice cream, they most likely think of artificial sweeteners or tasteless garbage. Trust me, I have tasted absolutely AWFUL healthy ice cream alternatives that I don’t even mention anywhere, because who wants a negative Nelly? As much as I understand how criticism can be beneficial for both the company and their consumers, I prefer to only uplift others. That being said, I may or may not share a brief list of products I do not recommend in the future. Fortunately, there aren’t many on the list, so that’s probably not going to happen anytime soon.

Keeping that in mind, So Delicious has a line of coconut milk ice creams that are completely free of added sugar. There are a total of four flavors: vanilla, chocolate, mint cup, and butter pecan. I tried the latter several months ago and didn’t like it very much, as the texture was icy, and despite it being butter pecan, I experienced a minty aftertaste with little salt factor and bland pecan pieces. Don’t get me wrong–it was edible and I credit the brand for manufacturing a fun-flavored product that is much healthier than most of their decadent counterparts. The ice cream didn’t go to waste and I finished it within a little less than two months. Hey, it has a 91% approval rating on its website. I might have gotten unlucky.

Eventually, I decided to give the four-pack another chance with another one of its members, the vanilla bean flavor. I figured that butter pecan–as a flavor, that is–wouldn’t complement a coconut base in general, hence something simpler may or may not taste better.

Analyzing the packaging and labels on the pint, all of the ingredients seem relatively natural or at least not of “chemical” substance. While the fact that there are eleven ingredients in such a simple ice cream is intimidating, note that the gums and fibers serve for textural and thickening properties, plus they are plant-based rather than synthetic. Each half cup serving (old standard size for ice cream before the label change) is 110 calories, 7 grams of fat (6 being saturated, which is pretty substantial), 18 grams of carbohydrates, 11 grams of fiber (HOLY CANNOLI), 1 gram of sugar (HOLY GUACAMOLE), and less than 1 gram of protein.

To be honest, when I opened the pint and saw the surface, I didn’t feel incredibly confident about the consistency. Still looked quite rocky and stiff as the butter pecan flavor, so I decided to wait it out around five to ten minutes before officially breaking into it. BOY, was I in for a surprise. 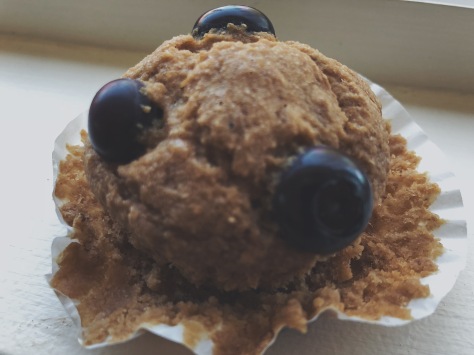 Upon taste-testing, my sister and I were lounging in our living room and re-watching every movie from The Twilight saga with sweet potato fries and some homemade vegan banana blueberry muffins. My sister was actually the first of us to try the ice cream. Watching her reaction, her eyes lit up, sparkled a little bit, and struggled to prevent her jaw from dropping all the ice cream in her mouth. She claimed that it didn’t taste healthy OR sugar free. I decided to take a spoonful myself and was instantly sent to heaven. After taking another scoop, I crumbled a blueberry muffin on top of the pint that didn’t see the light of day. 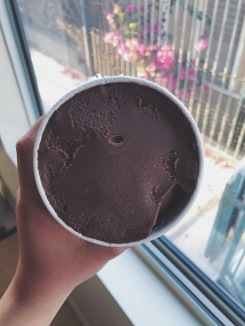 In addition, to the vanilla bean flavor, I also tried the chocolate variety of this line. It has the exact same macro count and ingredients list (except it includes cocoa instead of vanilla bean) as those of the vanilla ice cream. While it is ten times tastier than the butter pecan flavor, the vanilla bean is still my favorite. The chocolate ice cream did not thaw out nearly as well or consistently, so I ended up with crumbly scoops that were perfect in some areas, icy in others. I do have to credit the flavor for providing a strong and rich cocoa quality instead of a subtly diluted chocolate taste. My scoops were garnished with Special K red berry flakes, strawberries, and some coconut clusters that included pumpkin seeds, chia seeds, and sunflower seeds for extra crunchiness.

Don’t be too fooled by the labels and the simplicity of this ice cream. I was incredibly shocked to discover how spectacular the vanilla bean ice cream was! As of now, it’s been my favorite weekend treat when I want a satiating frozen novelty for dessert, and admittedly, breakfast. Yes, one day I decided to take things to the sweeter and more indulgent side with a whole pint of the vanilla ice cream and a Lenny and Larry’s white chocolate macadamia nut cookie. Not a crumb was left.

Other factors serve as winners. This ice cream is very, VERY satisfying, even more than Halo Top! It is probably from all the fiber and the saturated fat (which isn’t necessarily a positive, but hey, moderation is key),

Cost-wise, each pint is $5-$7, which is around the same as Halo Top (generally $6-$7, but sometimes it is even more than $10!). However, So Delicious is more often on sale and has a better reduction if so.  Takes FOREVER to de-frost after taking it out of the freezer for an extended period of time. Some dairy free Halo Top pints started softening within five minutes of sitting out in the kitchen or in the fridge, but this pint generally takes more than fifteen minutes, even longer depending on how much time it has resided in the freezer. In a way, it figures since the ice cream is coconut-based, which is much more solid at room temperature, plus it is primarily saturated fat and contains a hefty amount of it (Halo Top is mostly protein, thus it thaws quicker).

Additionally, I previously mentioned that the butter pecan and the chocolate ice creams did not come close to the vanilla bean flavor. I may try the mint chip ice cream in the future, but I do not have extremely high standards for it. Thus, I really only like one out of four ice cream flavors in this line, whereas with Halo Top, I pretty much have a massive handful of favorites I can pick from.

Would I say this ice cream is better than Halo Top? Truth is, it really depends on what angle you’re eyeing into. If you want an ice cream that has more flavor variety, is higher in protein, and is less than 400 calories a pint, Halo Top is your best bet. If you prefer something simpler with a decadent texture and with minimal ingredients and sugar, So Delicious should be a go-to. That being said, collectively, So Delicious wins in terms of ingredient quality, fiber content, and sugar count, but Halo Top takes the lead when it comes to flavor selection, thaw time, and protein content.

Nonetheless, I don’t count Halo Top and So Delicious as “competing” brands since they both have different target audiences. I still adore both kinds of ice cream depending on my mood. I am very curious to see how So Delicious’s new line of dairy free and low calorie mousses taste, but I haven’t found a store nearby that carries them yet. Seriously going to have to cross my fingers that they are sold more widely as soon as possible!