Just a week ago, I visited the happiest place on Earth (fun fact: a bible study professor always used Disneyland as an example that Earth cannot possibly be the “happiest place” because Disneyland, claiming to be the “happiest place on Earth”, still has crying babies. Thought that was a funny little anecdote, but I don’t consider Heaven, which is the biblical classification as a main paradise, as part of Earth) with my boyfriend. Talk about a day that was LOADED with childhood nostalgia and magic.

You can glance at my Instagram highlights for the full adventure–rides, attractions, shows–since we will mainly be focusing on food in this post! Also, I mainly took videos instead of photos for the park features, versus pictures of food and souvenir shots. To look at some picture takes ten to fifteen seconds. To watch the same amount of video footage, each clip being five to fifteen seconds long, would take forever.

With that being said, let’s just hop right into the Disneyland railroad train, shall we? At least for the food…and yes, there WILL be a Part 2 sometime in the future. Not sure how soon that will be, but I promise, promise, promise…it’s coming.

For months and months, I’ve heard about the famous vegan red velvet cupcake available at the Sprinkles Cupcakes bakeries in California. As of now, Sprinkles Cupcakes only has one vegan variety out of their whole cupcake selection, but they do have some gluten free and sugar free options (plus only one gluten free cookie flavor). But to Candace and Charles Nelson, PLEASE see if you can manufacture vegan-friendly lemon blueberry cupcakes, carrot cupcakes, cinnamon sugar cupcakes, peanut butter chocolate cupcakes, and sprinkle cupcakes! 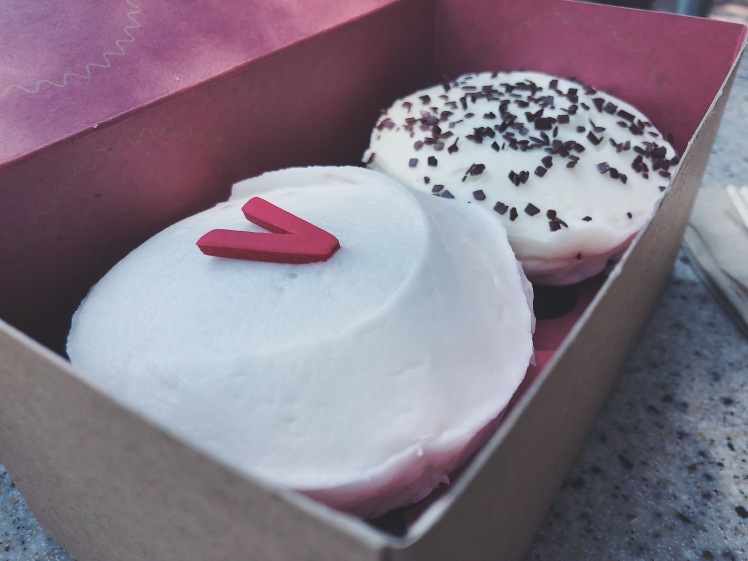 Anyhow, the two of us stopped by and bought the vegan “V” red velvet cupcake for myself and a black and white cupcake for him!

Firstly, the cupcake is perfectly rounded at the top with beautifully spread soy-based cream cheese frosting and a crisp red V (honestly not sure what it’s made out of, but I can only assume hardened sugar?). The layer of frosting was quite hefty and a little too thick for my liking, as I am not a big fan of any kind of frosting. As for the bottom, it was significantly lighter and thinner, so it served as a poor foundation for the cupcake that fell off easily. But who cares–it was meant to be eaten, not meant to be stood in a stationary and sole position.

And I did eat it. More so, smushed it into my face. Or at least tried.

By golly, the cake itself was such a delight. Moist and fluffy, the flavor was delectably rich in red velvet quality and I absolutely loved it. There’s a sense of sponginess in the cupcake that made it easily crumbly. Pro hack: to add sweetness to the bottom of the cupcake, I salvaged extra cream cheese frosting and added a little bit to each bite of plain cake.

One word: iconic. Everyone, vegans and non-vegans alike, love the Dole whip immensely! I kid you not, the line for the Dole whip at the Enchanted Tiki Room (found at the front in Adventureland) always remained miles long throughout the day. In the middle of our rides’ excursion, my boyfriend treated me to a cup of the glorious pineapple soft-serve when the line looked the most promising. 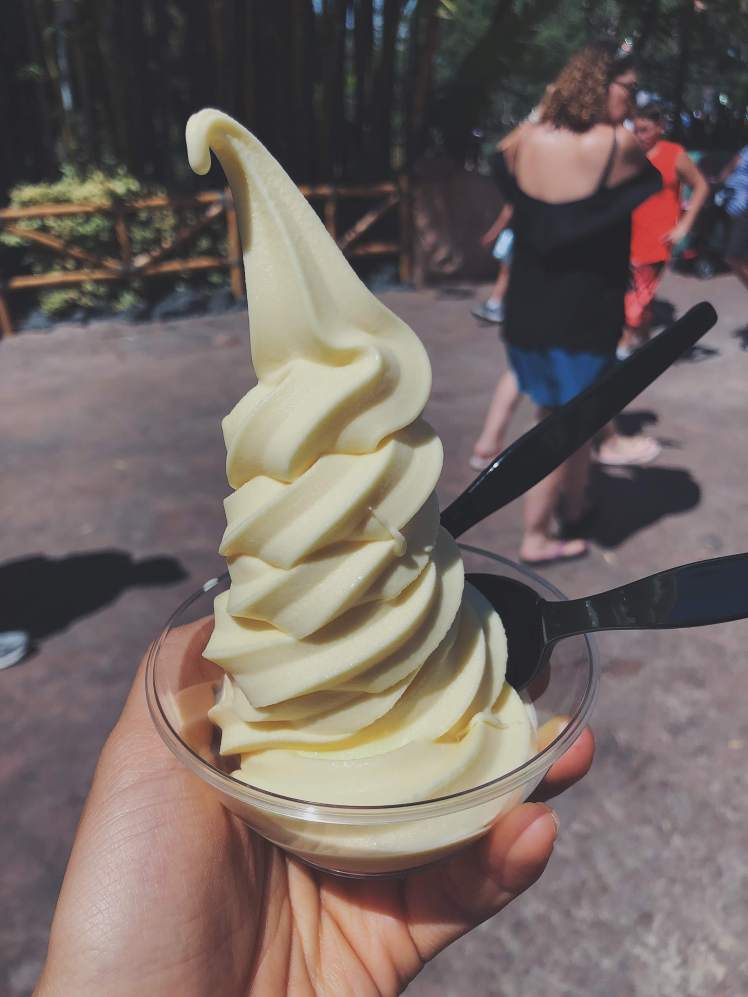 Though the Dole whip doesn’t look like much, I was be-dazzled by its sense of structure. Most vegan frozen yogurts are relatively icy and melt extremely quickly, but this soft-serve remained very poised and creamy. Taste-wise, the flavor is splendidly strong in pineapple, whereas the texture had a wonderfully silky feel. No wonder it’s so remarkable!

Overall, I absolutely adored this treat. There were also pineapple floats being served with Dole whip, pineapple juice, and mini parasols that I want to try next time!

Nothing screams Disney more than Mickey Mouse. He was Walt Disney’s first ever original character AND was voiced by Walt Disney himself (so was Minnie Mouse, ICYMI 🙂 )! Similarly to Wetzel Pretzel’s and Auntie Anne’s, Disneyland has all kinds of pretzels that come in various flavors such as jalapeno cream cheese and cream cheese-filled. On the other hand, there are only two kinds of plain pretzels you can find if trying to avoid dairy, which are salted or unsalted.

Despite the ordinary appearance, the pretzel dough was glorious. Airy, moist, and a little crisp from the sea salt chunks, this is the ultimate way to enjoy bread in a fun fashion. This pretzel supposedly complements mustard, but I personally did not care for that combination and just ate it plain. These can be found at any of the pretzel food carts, which are scattered all around both Disneyland and California Adventure parks.

Am I the only one who also believes that The Princess and the Frog is SUCH an underrated movie? First of all, it revives the 2-D animation style that was so treasured in the Disney animated movies during the early to mid-2000’s. But speaking of the movie, gumbo serves as a motif for the storyline as a way to connect people, accomplish dreams, and bring a sense of hearth. While the outdoor cafe Royal Street Veranda was created well before The Princess and the Frog, enjoying some gumbo strongly reminded me of this beautiful movie.

Behold the two gumbo orders: vegetarian gumbo and steak gumbo, both packed in sourdough bread bowls! Of course, I had the vegetarian gumbo, which is also vegan-friendly! It is loaded with peppers, onions, carrots, celery, and garlic in a thick tomato-based soup. Yes, the gumbo looks like a swampy mess in itself, but it is a 10/10 spectacular swampy mess. Packed with various veggies that are perfectly cooked and were swimming in a beautifully decadent soup, I finished every single spoonful of gumbo. I could enjoy this again and again!

Don’t even get me started on the sourdough bread. Who doesn’t love sourdough? I started off with the circular lid by dipping bits and pieces of it into the gumbo to soak up even more flavors, then dug into the bread bowl itself once I polished off the gumbo. Hands down, this is most certainly a dish I will return to during my next trip to Disneyland.

P.S. It tastes GREAT with a little Tabasco! Yup, even more The Princess and the Frog inspiration!

Stay tuned for Part 2! What are your favorite features in Disneyland? Let me know of any vegan-friendly food recommendations as well!