Trends in the fitness industry come and go all the time. The amount of fads we come across online in regards to nutrition and working out are absolutely insane. One day pre-workout is the holy grail, other days it is a marketing scam. Same with foam rolling or high-intensity interval training. There are a few consistencies, which generally include the fundamentals of weight loss, muscle gain, health improvement, performance optimization, all that jazz. Now, there is this one positive hot topic in the fitness community: reverse dieting.

By definition, reverse dieting is essentially the opposite of dieting in which you increase your calorie intake in small increments over a gradual period of time in hopes that you can minimize fat accumulation and increase your daily caloric maintenance. The intention is to mitigate weight gain as much as possible, or at least fat gain. An increase in muscle mass is often desired, but not always. Reverse dieting is most frequently utilized when finishing bikini prep or any sort of regimen where you’d have to diet down to a certain amount of food that you’d find restrictive.

While there are a limited amount of studies that center around reverse dieting and what has been proven with it, there is one study that showcases how a two-and-a-half month overfeeding period eventually led to metabolic adaptation–though the small amount of subjects does impose a limitation on this report. In addition, there are more than plenty of anecdotal success stories demonstrating how reverse dieting can do wonders for the human body in regards to avoiding metabolic issues and rapid weight gain post-cutting. Truth is, I never actually knew about reverse dieting even before I actually decided to attempt it. It seemed like a no-brainer to me–increase calories very minimally at a slow and steady rate, and maybe, juuuuuust maybe, my body will re-adjust itself with time. 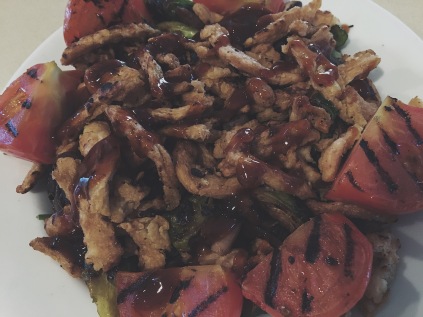 I used to always think to myself how eating 3000 calories a day and maintain my weight would be a dream. I envied every single fitness influencer I’d come across who could consume copious amounts of food–even the naughty kinds–and still sport cheese graters on their abs. Even on rest days, they could probably eat a whole fridge’s worth of food and be fine. My question was…how on EARTH do they do it? Is it genetics? Do they simply train a lot more? Calorie control? What is the answer (though the latter probably makes the most sense)?

People can argue that these fitness influencers are secretly restricting their food intake when they don’t post online. Yes, that can be true, but I think that realistically, the majority of users, especially those who don’t have as many followers, show integrity in their content. In addition, most people without social media accounts who post on forums or other websites still share success stories and advice in regards to reverse dieting and/or increasing food intake while minimizing fat gain.

So here is my story:

Around this time, I had reached a weight range that I never thought was possible. And, I absolutely adored it. On the other hand, my lifestyle was extremely limited and physically exhausting. Honestly, I do not know how I survived a routine with the daily two hours of cardio-based exercise on average while eating approximately 1300-1500 calories worth of mainly protein and vegetables. Arguably, I kept up a bikini-prep regimen for multiple years.

My social and familial life suffered greatly. If I were to go out to eat at a restaurant I didn’t know about, I’d spend hours analyzing its menu to see what would be the most diet-friendly option so that I could eat in peace. Sometimes I would display a passive aggression at my loved ones for selecting a place that didn’t have a “clean” dish. Rest days and indulgences were rare because I could never afford any guilt trips for slacking off–plus, they only had to occur on my terms. Eventually, I reached the realization that I hated my routine and had nothing to lose with change. I’ve gained enough knowledge and discipline to always return to my then-present regimen. Might as well become a bit more flexible so that people don’t dread me as much and that I don’t dread life as much, you know?

Just taken almost two weeks ago where I’d basically eat 2000-2500 calories a day on average, all while incorporating strength training with Plyo work and HIIT in my exercise routine. Currently, I challenge myself to lift as heavily as I can without distressing my joints and muscles. I weigh roughly around the same range, but I probably have more muscle mass–possibly some fat–that I’ve gained from lifting frequently! I still adore the way I look–well, at least before eating a meal because I bloat super easily. But ANYWAYS.

Flexibility levels can still afford to lengthen some more, but now, I stress out way less when it comes to dining out and trying new foods with my social circle. It feels extremely liberating to not obsess over macros during every single bite. Once I decided to transition towards a vegan lifestyle, I knew that I had to embrace a higher carbohydrate intake. With time, I came to metabolize more glorious carbs and sugars much more smoothly than when I followed a relatively low carb diet (not keto obviously).

Diet-wise, you can see for yourself that a lot has changed, aside from the drastic  improvement from my horrendous filter to a somewhat cleaner photo-editing complexity. My portions are much larger, mainly filled with more nutrient-dense foods. However, I also have expanded my diet to include a few more refined treats such as the vegan desserts above! Funny that I say this, but if my sixteen year-old self were to look at the right half of food photography, she wouldn’t even fathom how I’d transition into such a diet. You’re eating donuts? You’re eating a whole cup of dry beans when I don’t even eat half a cup of oatmeal? HOW?!

To be fair, I did allow myself a few treats so as long as I strategized around them (i.e. big breakfasts had to be balanced by a non-existent lunch and/or dinner). With that being said, the unknown and the unplanned were my weaknesses when it came to food. If I found myself in a situation where I did not have a photographic image of my next meal, my mind would freak and practice mental gymnastics to create a solution for the after-math, which I’d think to be drastic but was realistically marginal. My lack of flexibility and balance were the elements weighing me down from truly enjoying my lifestyle.

Do I regret practicing extreme rigidity and relatively disordered eating patterns? No, since I never would have learned what balance looks and feels like. What I do regret is portraying this limiting lifestyle as a healthy one. But here is my story to showcase that I was wrong once and that with aging and experience, I can indeed overcome my mistakes. I admit that I am still not 100% free from stressing out about food or at least planning out most of my meals ahead of time (though I think a lot of us feel the same way), but I know I have come so far.

At the end of the day, whether reverse dieting is truly necessary for you is up in the air. Some people can jump straight from a 1200-calorie meal plan back to maintenance or even to bulking without a problem, whereas others may need months, even years, to climb their calorie intake upward. Personally, I needed the transition of upping my food consumption solely for the mental, emotional, and psychological transformation. My actions were in my control, but my reactions were not. That was the scary part of it all.

Reverse dieting is much more than tracking consistent body progress. Changing one’s relationship with food plays such a strong element because you need to re-think how you view certain foods.: carbs are not the enemy, fat does not make you fat, and sugar is not the source of all evil. Ultimately, reverse dieting brought me to a much happier state of life where I don’t have to think about food and fitness all the time and I accept that my body will fluctuate on a constant basis. With every up and down, I embrace the present moment. Even though my general body measurements have not changed that drastically, my perception has for the positives.

7 thoughts on “Reverse Dieting: My Experience”