Pasta and I have had an interesting history. Ten, fifteen, heck, arguably twenty years-ago, I lived for pasta consumption and just the presence of pasta. Yes, I was possibly destined to become a pasta snob. Macaroni and cheese, fettuccine alfredo, classic marinara, peanut noodles, Pad Thai, pho, chow mein, I loved everything that involved a noodle. However, once I entered high school, something inside of me kind of burned out. My cravings for pasta immensely disintegrated for a few years.

As of the past three or four months, pasta juuuuuuuust might be making a comeback in my life. 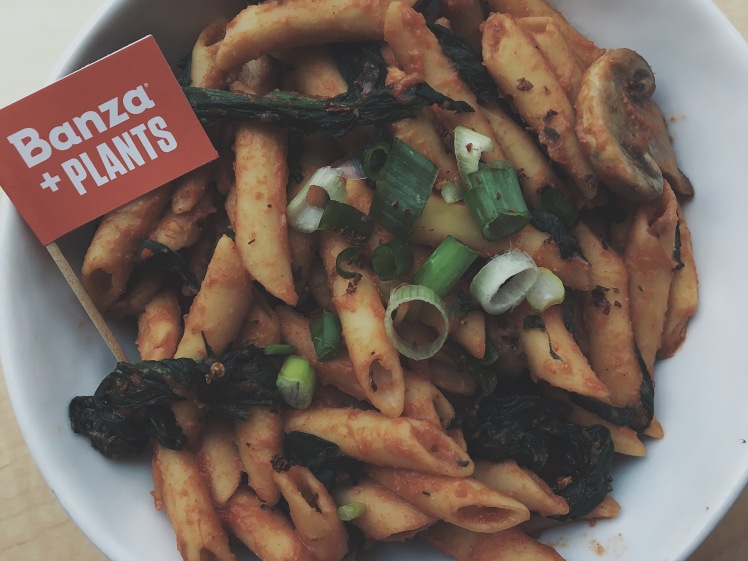 I have reviewed Banza pasta on my blog more than a year ago and it still stands as my favorite chickpea-based pasta manufacturer to this day. In addition, they were featured in a vegan butter chicken curry dish and mushroom marinara rotini recipe I created in my apartment of freshman year. Sigh, those were the days where I barely knew about food photography. And when I attempted to eat an entire five-pound kabocha squash. *shivers*

But anyways, the Banza Plus Plants campaign on Instagram ignited me to put on my chef’s cap (and coat, per say) and come up with a simple but tasty and somewhat creative plant-based recipe that would wow any crowd. Pesto and anything cheesy were sort of out of the question because it seems that almost everyone is whipping those kinds of pasta dishes nowadays. I wanted to put one of my favorite chili sauces to the test and also bring out the inner spice queen in myself: gochujang.

Gochujang is a Korean red chili paste made with chili powder, glutinous rice powder, fermented soybeans, barley malt powder, and salt. Flavor-wise, gochujang possesses a powerfully potent aroma that screams chili and soybean as well as a pungent, almost shocking, kind of spice kick that comes with sweet and sour undertones. It is generally incorporated into salads, stir-fries, noodles, soups, stews, rice dishes, and as marinades for Korean barbecue.

Because of its somewhat “gutsy” flavors, it took me three tries with gochujang. As a first timer, I learned that it should never be consumed alone. WAY too full-forced as a stand-alone ingredient. Second trial, I enjoyed it as a chili factor in my lentils salads, as the greens and lentils served as a more neutral base. Third time around, mixed the gochujang with some soy sauce, rice vinegar, sesame seeds, and bada-bing-bada-boom–magic.

This gochujang pasta sauce works amazingly with any noodle. I personally used penne for two reasons: 1) it was the only Banza pasta available at my local grocer, and 2) penne is a shorter noodle that is more suitable for a summer salad dish. However, you are more than welcome to use spaghetti noodles (my original target), rotini, farfalle, angel hair, fusilli, gnocchi, and many more. Heck, if you have pasta noodles shaped like circus animals or Disney characters, I ain’t stopping you as long as you try this amazing recipe out!

Have you ever tried gochujang sauce? What is your favorite pasta noodle?