I reviewed Arctic Zero. I reviewed Eat Enlightened ice cream. I reviewed WINK Frozen Desserts. So, where’s Halo Top? Well, there is a major reason why I avoided Halo Top even prior to my vegan days. Each pint contains raw egg yolks, and I pretty much have a phobia to eating raw eggs. The jump into veganism only pulled me further away from ever trying them.

Yep, Halo Top has officially released a dairy free line! It’s loaded with incredible flavors such as Caramel Macchiato, Chocolate, Peanut Butter Cup, and Sea Salt Caramel! My goal is to try them all out, but we’ll just be focusing on two flavors for now, because it is still difficult to find a lot of the other flavors aside from the ones I have tried in my area. Don’t worry–I’m still on the hunt, and I have coupons to spare (for myself, that is)!

Okay, but before I get into each in-depth pint review, let’s start with a general overview of Halo Top’s brand. It is one of the most popular lines of healthy ice cream alternatives, if not the most popular, especially because of its impressive ingredient and nutritional profiles. Organic stevia and erythritol are the main sweeteners, but some pints do have a moderate to low amount of cane sugar. Unlike the dairy free flavors, the dairy-based pints have 20 grams of protein rather than 12.

Either way, both lines of ice cream seem to be fairing very, very well in popularity. Whenever I came home for the holidays, my sisters always had multiple pints of dairy Halo Top in the freezer, so there was something amazing about this ice cream that I didn’t know about. Once the dairy free flavors came out, I knew that I just had to get my hands on some sweet, sweet ice cream! I did what any smart person would do and picked the cinnamon roll and oatmeal cookie flavors, which were the only ones available at my local Whole Foods.

First up on the list is the cinnamon roll ice cream. Many regulars and Halo Top workers themselves like this flavor a lot, and I figured that I’d like it too. And I was right! The texture is thick, smooth, silky, and very creamy, while the flavor itself is sweet and somewhat aromatic. There are bits and pieces of cinnamon roll dough in almost every bite, so you’ll definitely be chewing on something. It’s a given that its decadence will require more calories, so it is 360 calories rather than the average 320 calories. But hey, it’s still a heck of a lot better than a pint that is over 1000 calories.

I enjoyed my cinnamon roll ice cream with some fantastic homemade whole wheat cinnamon rolls (recipe here) and True Nutrition vegan pumpkin spice protein. They were the perfect creamy and cold contrast to the warm bread-like cinnamon rolls. I think I finished the rest of the pint that evening as well!

Next (and last so far) is the oatmeal cookie pint. This one is…interesting. I like it, but it’s interesting. Just think about a movie or a book that you love, but would probably not want to sit through the entire time (for me, that would be 22 Jump Street). That would be the oatmeal cookie flavor. You love it, but it’s not something you can fully enjoy on its own. The texture is similar to that of the cinnamon roll ice cream, but the flavor itself is interesting. It tastes more like sweetened oatmeal rather than an oatmeal cookie because of the raw oat chunks. I expected oatmeal cookie pieces rather than raw oat chunks, and I think incorporating cookie pieces would have added a crispness that more consumers would favor. Personally, that is why I think it’s lower on the popularity scale than the other dairy free flavors. Overall, I still really love it, and I think it’s underrated for its rep. 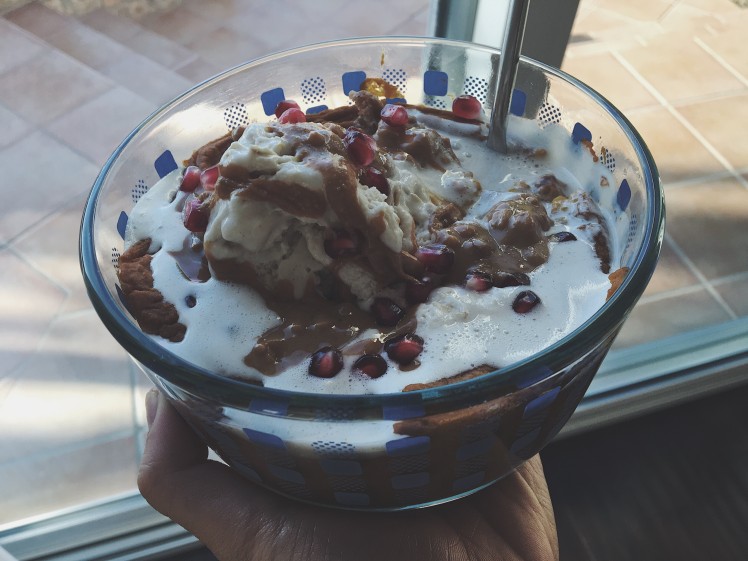 The oatmeal cookie ice cream was enjoyed over a single-serving crust free pumpkin pie with pomegranate seeds and crunchy peanut butter! I highly recommend having the ice cream with something crunchy, warm, and more strongly-flavored. Woohoo!

With a large variety of creative, macro-friendly, and tasty ice creams, it’s a given that Halo Top dominates the healthy ice cream world. Many companies have followed in their footsteps to create lower calorie and diet-friendly ice creams, but none of them really match what Halo Top holds. Their formula works VERY well, and it continues to expand its growth. I am absolutely elated that Halo Top has decided to take the first leap and branch out to vegan options for those who cannot have dairy or just choose not to (I  relate to both).

They recently opened an ice cream shop just half an hour away from me at the Westfield Topanga mall! The shop sells ice cream by the scoop and by the swirl. You can top it all off and serve it in a cone! (I haven’t tried it because they don’t have their dairy free flavors there. DARN.)

Quality doesn’t come cheap. Any Halo Top pint you find here in California will be at least $5.99, and $6.99-7.99 on average. If there are any other places in America that have Halo Top for cheaper, PLEASE LET ME KNOW–I would love to learn about them, and it would be very helpful for those who want to find Halo Top for a more reasonable price! Another con is that not everyone is going to enjoy the protein sort of after taste and consistency found in each flavor. Personally, I don’t mind them, but to some, it may taste artificial. Just something to keep in mind.

Oh, and if you don’t live in America and want to try their flavors? Sorry. They don’t carry them outside of the country.

Halo Top has become my favorite ice cream brand–IF I am trying to watch my figure. Otherwise, if we’re talking about decadent and classically delicious, fatty, and sugary vegan ice creams, we can do so in another post. Anyways, I hope that Halo Top’s expansion will allow more dairy free flavors to be made available, and I highly recommend anyone–I mean, anyone–to try out their dairy free flavors. I look forward to using a few coupons I have in store to taste test some more flavors, so stay tuned for a second and even third part of this post!