Happy twentieth birthday to ME. BOOYAH.

FULL YOUTUBE VIDEO (also includes some footage of my workout and testing out the Body Analyzer):
http://youtu.be/HudPGIM25l0
Wow, just two days ago, I turned TWO decades old. I really want to say I feel old, but I cannot complain in comparison to a few others I know. But anyways, I could not have asked for an even more perfect day! With friends, food, family, and fun, my pleasures are simple. I just put in extra effort into my food. Let’s begin the recap, shall we?
My brunch consisted of some baked cookies using The Lion’s Pack vegan iced gingerbread cookie dough (it is gluten free and has probiotics and pea protein!), Mama Ganache’s artisans vegan chocolates (thank you to my roommate for them!), a peanut butter and jelly Bobo’s oat bar, homemade soyaki seitan, and a Japanese sweet potato “cake” topped with sunflower seed butter, fig cocoa jam, The Lion’s Pack vegan snickerdoodle cookie dough, a Health Warrior caramel sea salt chia bar, and surrounded with strawberries!

Everything tasted absolutely divine! The seitan was the most filling yet the most flavorful. I didn’t love the Bobo’s oat bar because there was barely any peanut butter flavor and no jam, so it basically tasted like baked oatmeal. I still ate all of it. It’s not worth the 340 calories in such a tiny bar. My favorite part of the cake was the fig cocoa spread, which I pretty much ate a fourth of a cup of. OH. WELL. 😂🤷🏻‍♀️
Here’s a close up of the Japanese sweet potato cake! 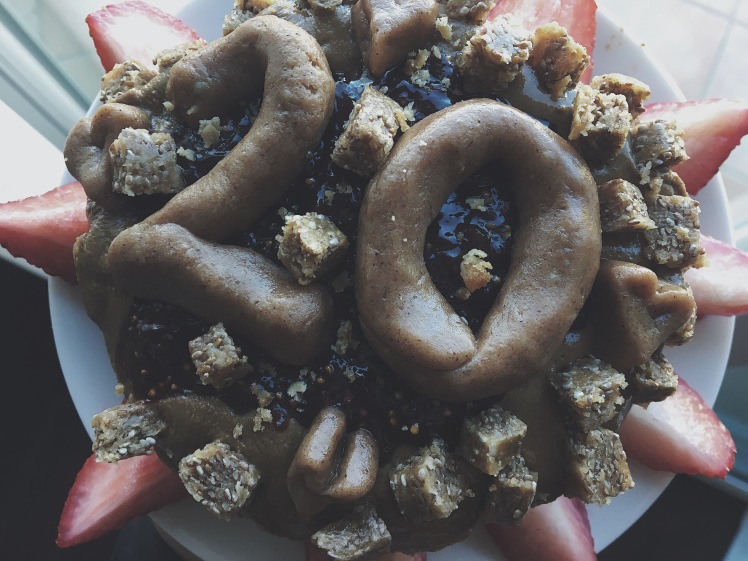 Oh, and I ate the sweet potato skins on the side. They contain most of the vitamins and minerals!

My friend Cory and I made a trip to one of my favorite vegan food brands of all time: Donut Friend! I have never actually been to its physical donut shop, but I’ve had their donuts time and time again at meet-ups and vegan festivals. 🍩👌😋 I was overjoyed to enter into this beautiful realm of sugary and fatty goodness!
Our donut box consisted of:

Now, this is donut 3, the angry Samoa donut!

Cory and I ended up splitting each donut, so we had two each! This was a perfect amount for me, but if I came into the shop a bit hungrier, I probably would have had at least one or two more! 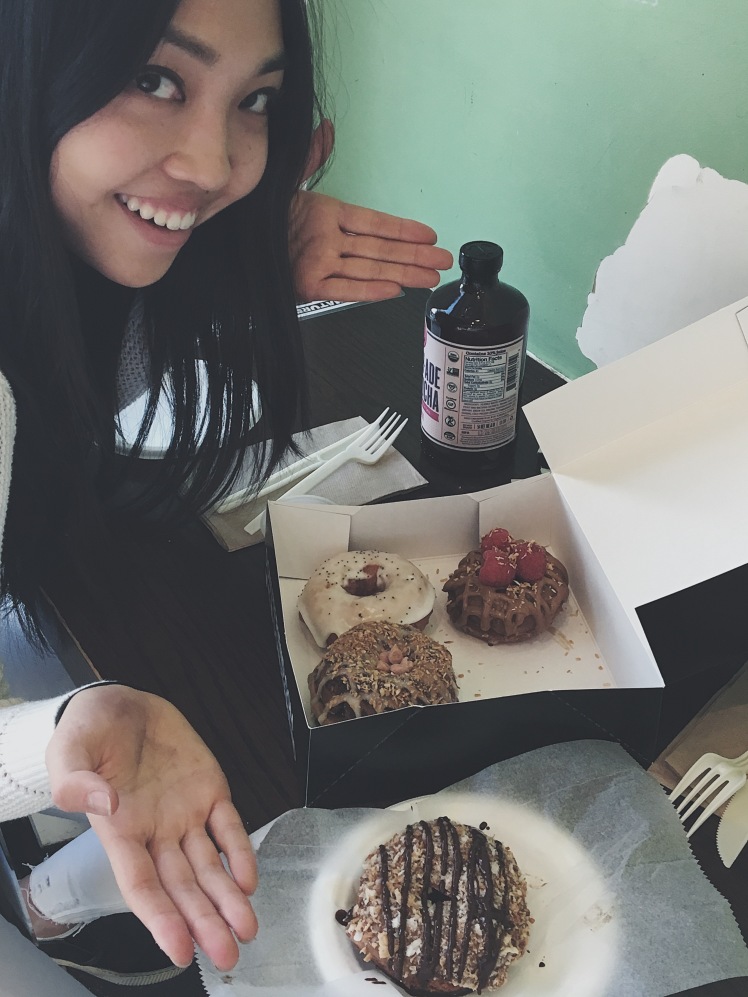 On the way home, I sipped on half a bottle of pomegranate kombucha. It was really refreshing and tasty!

For a special dinner, my family and I visited the Spice Affair in Beverly Hills, a fine dining Indian restaurant. Vegan appetizers were the English Pea + Green Moong Tikka patties and Coco-Li-Flower plates! 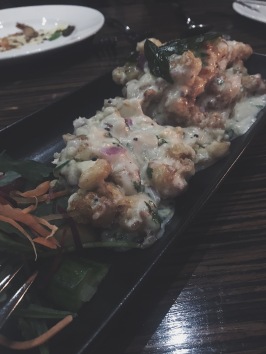 Processed with VSCO with f2 preset
The tikka patties tasted really nice, soft, and flavorful! I loved them with tamarind sauce. I’d think of them as mini veggie patties or burgers that don’t taste grainy at all! 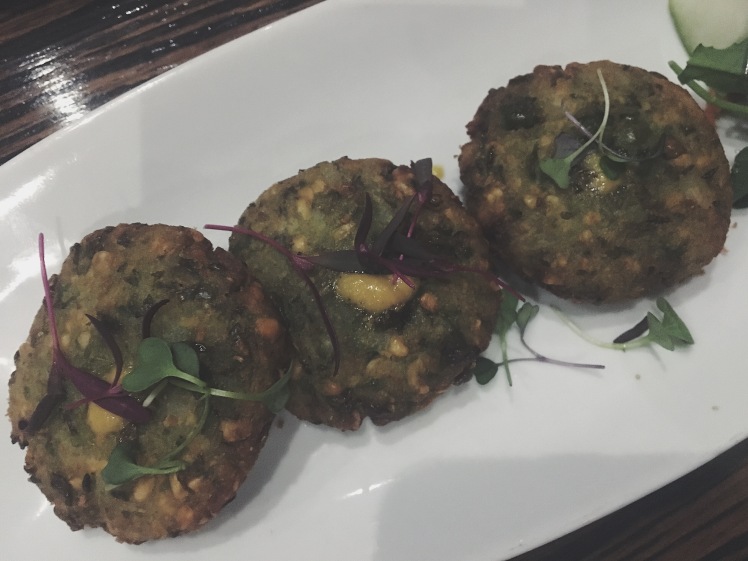 As for the coco-li-flower, this was a family favorite. It’s basically creamy and battered deep-fried cauliflower (way to ruin the nutrient density of a vegetable, HAHAHAHA sarcasm) that tastes heavenly! 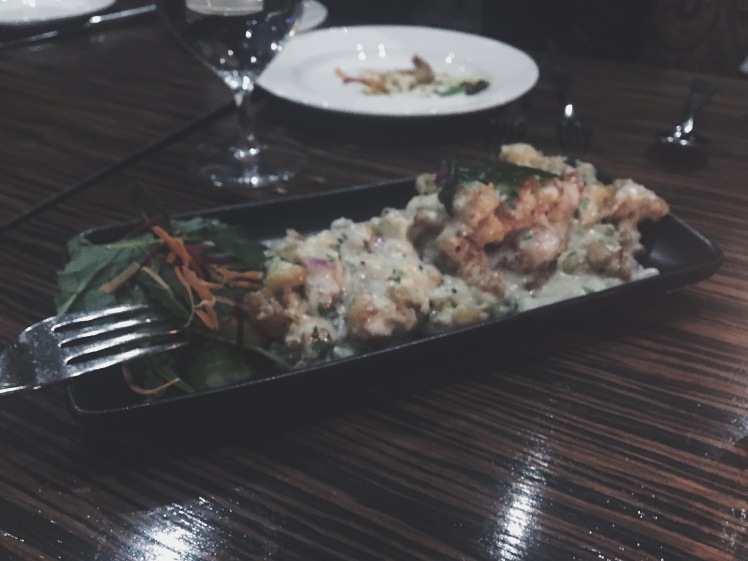 My main entree was the plate of tangy stuffed eggplant! There were two roasted baby eggplants covered in this spicy tamarind tomato sauce with almonds on top! The sauce was super decadent and complemented the eggplant so well! 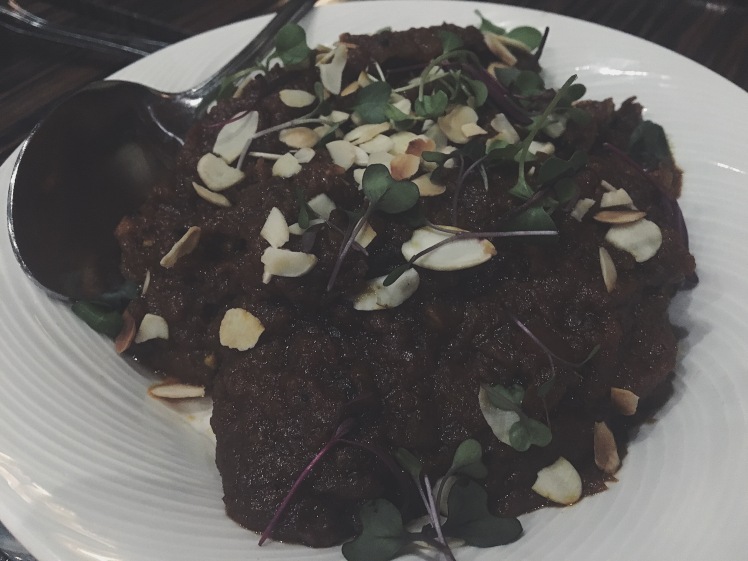 Here’s what my plate looked like! I had three more plates just like this. Yep, I had a lot of roti bread too! P.S. Roti IS vegan. Hooray!

Lastly, it’s not a proper day of eating without dessert. Am I right? Of course I am. My sisters and I met Cory once again to enjoy some carbolite frozen yogurt at The Bigg Chill! Cory and I selected the dairy free chocolate macaroon flavor. My size came in a quart, or 32-ounces! No regrets.

Here’s what came about the damage. I only had half the quart and ate the rest the next day. Still absolutely delicious!

Next day froyo noms included scoops of frozen yogurt, True Nutrition salted caramel vegan protein, homemade muesli, and chia seeds from a bag of Mamma Chia vanilla almond granola! This tasted more like ice cream than frozen yogurt, which I wasn’t complaining about at all! 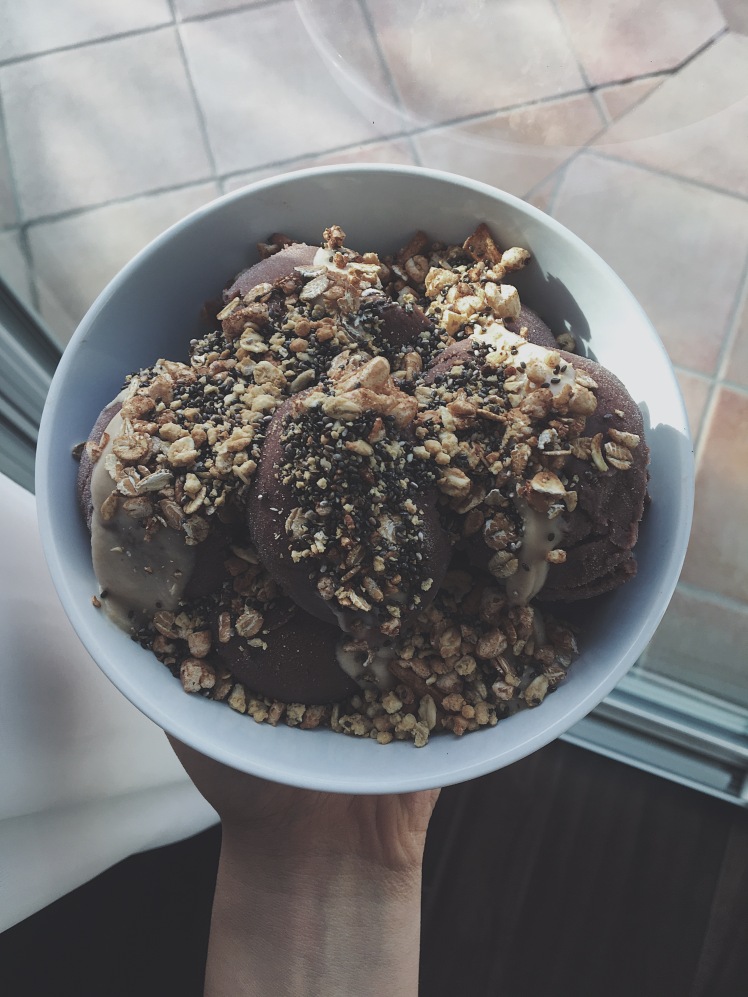