Hi everyone! I’m writing to you all in my apartment room on campus! Even though it’s my second day back here in college, it feels surreal that class begins in less than two days. Unbelievable, right? I am stoked to maintain a routine, quicken up the pace of life, and (possibly not-so surprisingly) get back into shape. Hey, I was born with a sweet tooth!

September 11th at 4:30 A.M., my alarm wakes me up, and I know I have to start getting ready for the move-in day. Half-asleep, I change into my clothes and pack some last-minute items that I needed overnight, and I hop in the car with my mother to nap on the ride. I wake up around two hours later, incredibly mystified as to how my mother and I already passed Santa Maria. We were blessed to find a shortcut to reach SLO (San Luis Obispo) immensely earlier after the Santa Monica freeway!

While brushing my teeth at a gas station restroom (never use these on a regular basis….yeck), I found an adorable little cafe called Seeds on Garden in downtown SLO to snag a light and quick breakfast. My order was a customized nine-grain slice of toast topped with mashed avocado, sunflower seeds, flax seeds, and a lil’ salt and pepper! 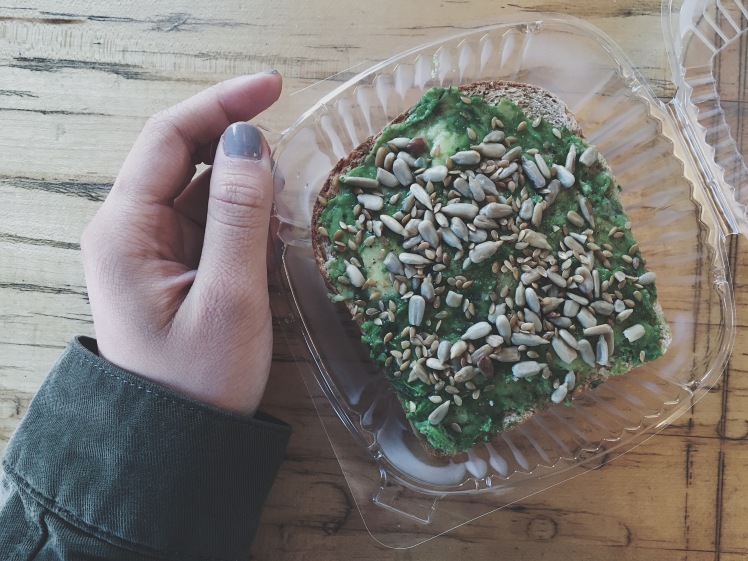 Who knew how easy it is to find healthy options that are so simple? I brought my order with me to the local Scout Coffee to try some green tea with my mother! 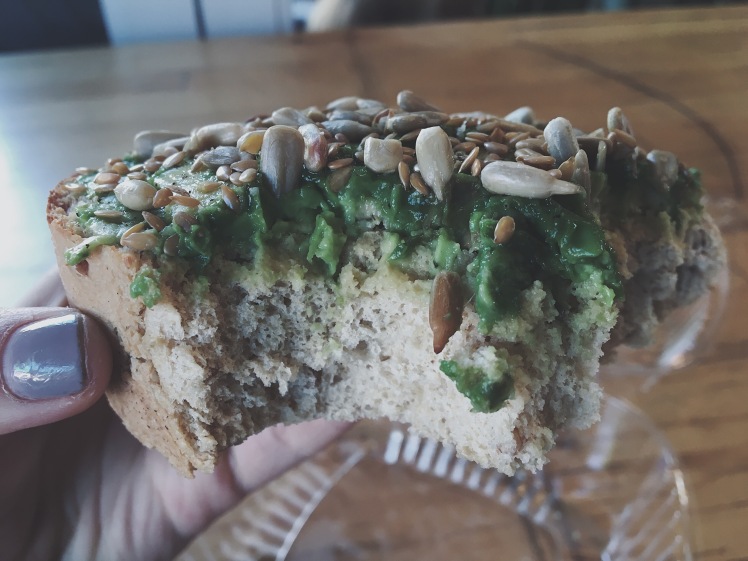 Daaaaaang, what a thick slice! Ain’t complaining. It’s funny to say that two years ago, and even just a year ago, I would’ve panicked. I would have shivered in fear and stress. Where’s the protein? Where’s the vitamin A? This has sooooo many fats and carbs. It’s probably over 500 calories….I shouldn’t eat it. There is more to name a few. I learned to say no. I simply chose not to invest in this mind of questioning. Yes, this is a source of carbohydrates slathered in pure fat. I know that. However, it was so delicious and almost revolutionary, because I never had something like this in a very long time. I’ve had rye bread solo and avocado toast with a thin slice of 21-whole grains bread and pico de gallo before, but this is different. I’m grateful for this experience.

Anyways, we finally got to our designated move-in destination after breakfast. Luckily, I was allowed to move into my apartment room almost three hours early! It only took us thirty minutes to organize all of my belongings–food, bathing material, beauty and dental care, study supplies, clothes, etc.–and meet with my roommates, aka my best friends. The only bad news is that our apartments were ridden with an ant infestation. They. Were. EVERYWHERE. It was so gross. There’s still some ants crawling up my legs and I have to keep brushing them off (and killing a few in the process unintentionally. Sorry!)! Even though the unpacking time was brief, there was still more to do. My mother ended up taking Lluvia and I to Trader Joe’s to stock up our fridge and Target to purchase a water filter and some paper towels! 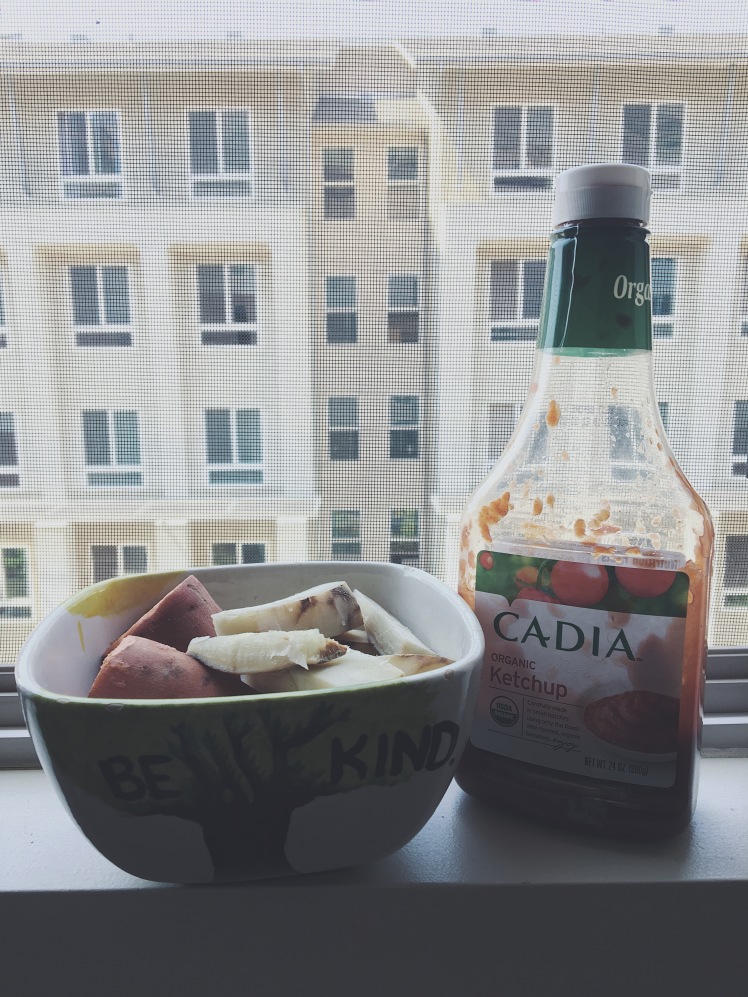 Once we finished our errands, my mother and I finally parted ways. It was a beautiful see you later that shared so much love. I miss her already, but fortunately I’ll see her in two months along with the rest of my family! My legs were so fatigued that I decided not to exercise today and I finished some leftover boiled yucca wedges and sweet potato that I brought with me on the road! Pairing both of them with organic ketchup elevated the dish to a whole new level! YUM! I was full for hours and hours afterwards.

Despite thinking that I could skip dinner because I was so satiated from my fiber-dense and starch-dense lunch, my friends convinced me to visit a potluck hosted by a sustainability club in a remote field for biological agriculture experiments. The food was absolutely abundant. I found vegan spring rolls, vegetable stew, bean salads, bananas, strawberries, vegan chocolate chip cookies, pastries, vegan macaroni and cheese, and dips galore. I tried babaganoush for the first time, and fell in love. Here’s a bean salad, a spring roll, and some roasted veggies! 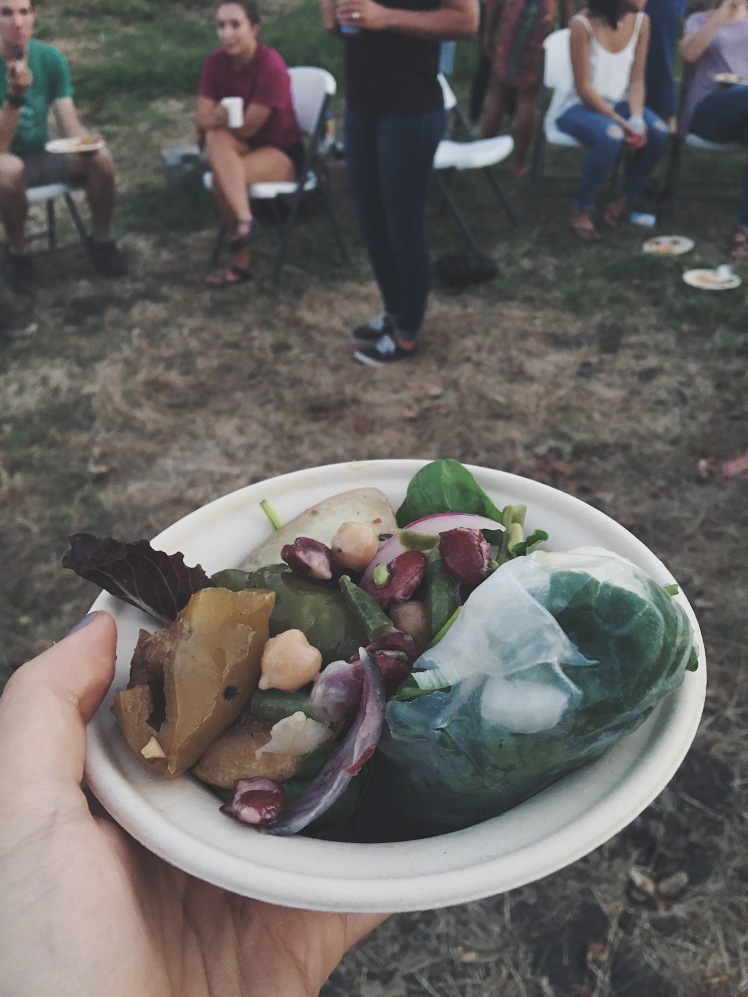 For dessert, I had to get my hands on strawberries and not one, not two, but THREE of these Mary’s Gone Crackers vegan chocolate chip cookies! Sure, they’re gluten free and all, but they were still an amazing treat! 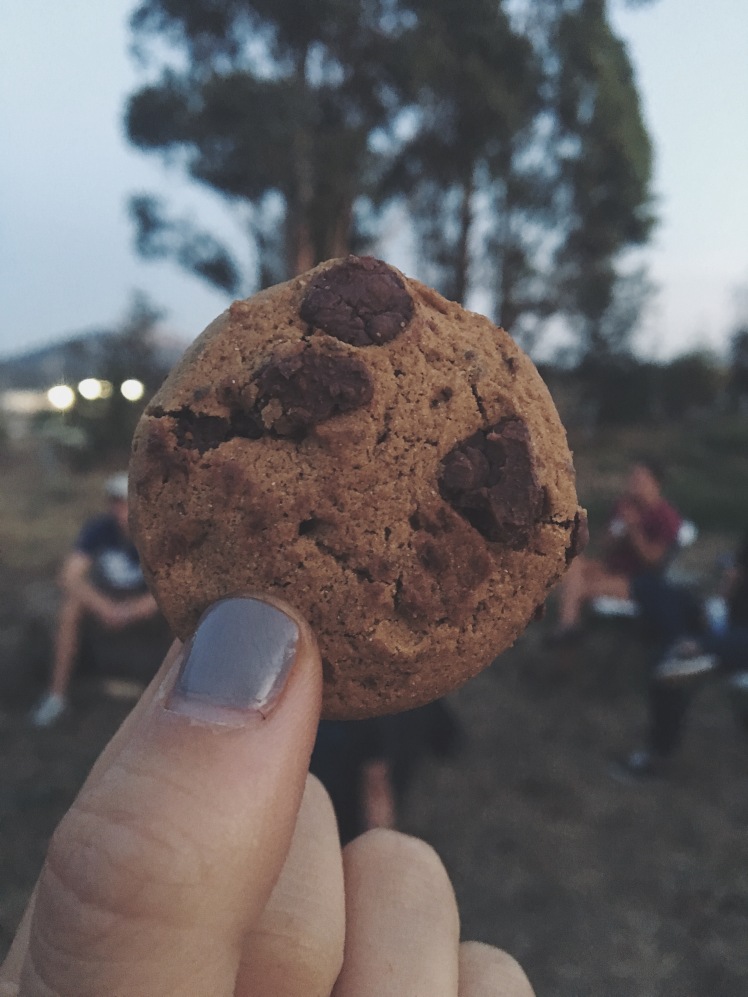 It’s funny to say this, but I had a total of four bowls of food! And I tried EVERYTHING that was vegan-friendly. Not a single dish was left without at least a little nibble. Even though I ate a larger dinner than I normally would have years ago–even on an active day–I felt amazing. There did come a time where my stomach expanded quite a bit due to how water-dense the vegetables were, but overall, I didn’t feel sick or disgusting.

Our whole friend group were the last to leave, and we spent the rest of the night going on a crazy adventure. All of us drove to a little lake outside of the campus where we floated on a raft in the middle of the lake! Most of my friends stripped down bare naked–I am NOT kidding you–in order to swim in the dark! Personally, I chose not to take off my clothes because it was too cold, plus I’m self-conscious about being completely nude. It was beautiful to see males and females interacting in such a peaceful and carefree atmosphere. No one passed judgment. No sexual, social, or abusive constructs were exchanged. Heck, I saw my first shooting star in ages.

We ended up not sleeping until past 11:30 P.M., and I was so exhausted that I pretty much dropped on my bed in a slumber as soon as I could! I woke up this morning at around 8 o’ clock, expecting to still be bloated and filled out from the food and nonexistent exercise. Nope. If anything, I actually felt pretty lean and energized for the day! The sensation was nearly perfect–it would have been exactly perfect if I didn’t wake up in the middle of an incredible dream I had!

Anyways, what I’ve taken away from this day is the power of stress. I plan on writing an entirely separate blog post about stress because this one has been long enough. However, since letting go of so many things (i.e. calculating every macro to the second digit, weighing myself every morning, checking how many hours I’ve exercised) in one day, I finally feel freer than ever. There are more than plenty of new plans I have in mind, but again, that’s for another post. I do hope you enjoyed this one and learned some new from it! Sending you lots of love–happy fall!