Back with another recap once again, baby! It’s only the third day, and I pretty much was spoiled with more food in one sitting than I used to eat in a week prior to my vegan days. My stomach already feels like bursting just looking at all of the photos!

The first part of my breakfast comprised of classically plain corn flakes with some ripe apple bananas and unsweetened soy milk! I was worried that I’d be bored with the bland flavors, but the sweetness from the banana and the crunchiness from the corn flakes harmonized together beautifully! Of course, I enjoyed drinking all of the soy milk afterwards. It tasted like banana milk with a few crushed corn flake pieces! Honestly, who on Earth would skip drinking milk that’s just been soaked in cereal? 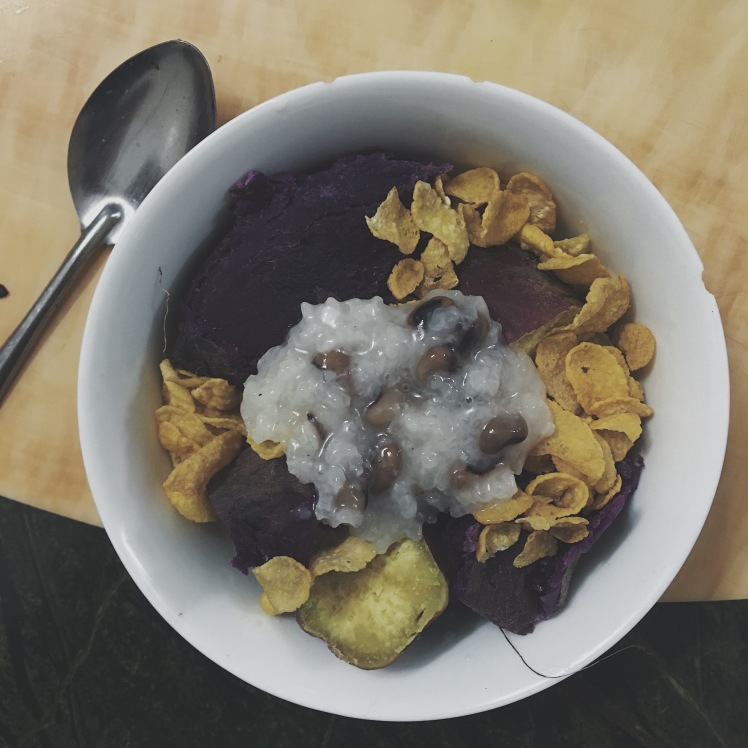 Couple minutes later, I was surprised with baked purple sweet potatoes, Japanese sweet potatoes, and chè with black-eyed peas (may or may not have said mung beans in the video!)! In Vietnamese, this beverage-like dessert is pronounced chè đậu trắng, and it is made with coconut milk, water, sugar, and broken rice! There are other variations that use sesame seeds, adzuki beans, black beans, potato, agar agar, jelly, mango, durian, bananas, and more! Before, I never liked the taste of these desserts, but this chè was oh-so-delicious! I think I just needed to try a truly authentic creation of it. Oh yeah, and you bet I smothered all of it and more atop my bowl of purple and Japanese sweet potatoes with corn flakes! I was absolutely stuffed afterwards, but it was worth it!

To tell the truth, I only did a little window shopping at a clothing market that was very similar to Ben Thanh, as well as my uncle’s jewelry store. I didn’t see anything that special aside from a uniquely adorable shirt that I bought, so I didn’t take any pictures of scenery and such today. However, you can still take a look at my video to find out what went on then!

At the jewelry store, I met my younger cousin Anna for the first time and practically fell in love with her at first sight! She was pretty shy, but everyone showered her with so much attention that my youngest sister could relate to what it’s like having a younger sibling. I totally lost track of how many times I tried to get Anna to say my name and give me a high-five. Never successful for either of them. Not even once.

Do you see a resemblance? 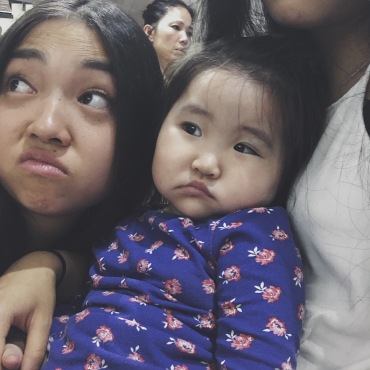 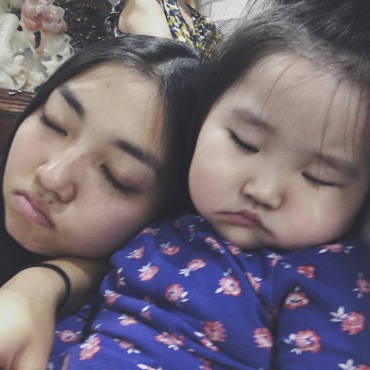 Lunchtime eats called for something incredibly special. Not for any particular occasion, but a few of us were craving banh xeo. Hence, our wishes were granted once we arrived back at my grandmother’s home! I myself feasted on not one, not two, but FIVE banh xeo crepes that were stuffed with mushrooms, tofu, and onions along with a head’s worth of lettuce!

Seconds after believing I was done, there’d be another banh xeo right in front of me to eat. At first, I was extremely nervous about eating the banh xeo pancakes because I wasn’t sure if they were made with eggs, but we got the OK after the nanny disclosed the recipe: rice flour, coconut milk, and turmeric! Woohoo! My shorts felt like they were going to explode after I finished eating. The food coma kicked in so quickly that I passed out in my room a minute later!

Hour and a half passes by, and we decide to play a board game that involves racing horses. Because of the rules, the game turned out to be such a pain in the neck that it initiated a lot of competition between me, my cousins, and my sisters.

For dinner, the family enjoyed some warming soup to calm our stomachs after a wildly special lunch! The housekeepers prepared me an incredibly simple but wonderful kabocha squash soup with some onions and spices! I ate around half of the soup in the entire serving bowl, even though I was still pretty full from the crepes. When in Vietnam, you eat like a queen when food is personally homemade.

Anyways, the rest of the night was spent in the citywalk, enjoying the life in the night.

Our car dropped us off right around the building of the People’s Committee and the famous statue of Ho Chi Minh!

Seeing these famous monuments sparked me to reflect on the political turmoil and the absolute chaos ensued by a single rebellion. It made me wonder how the experiences of oppression from an overpowering government that practiced so much violence towards its people would truly feel. I immediately felt sad for my parents and my relatives, but so grateful that they now lead prosperously loving and happy lives today. 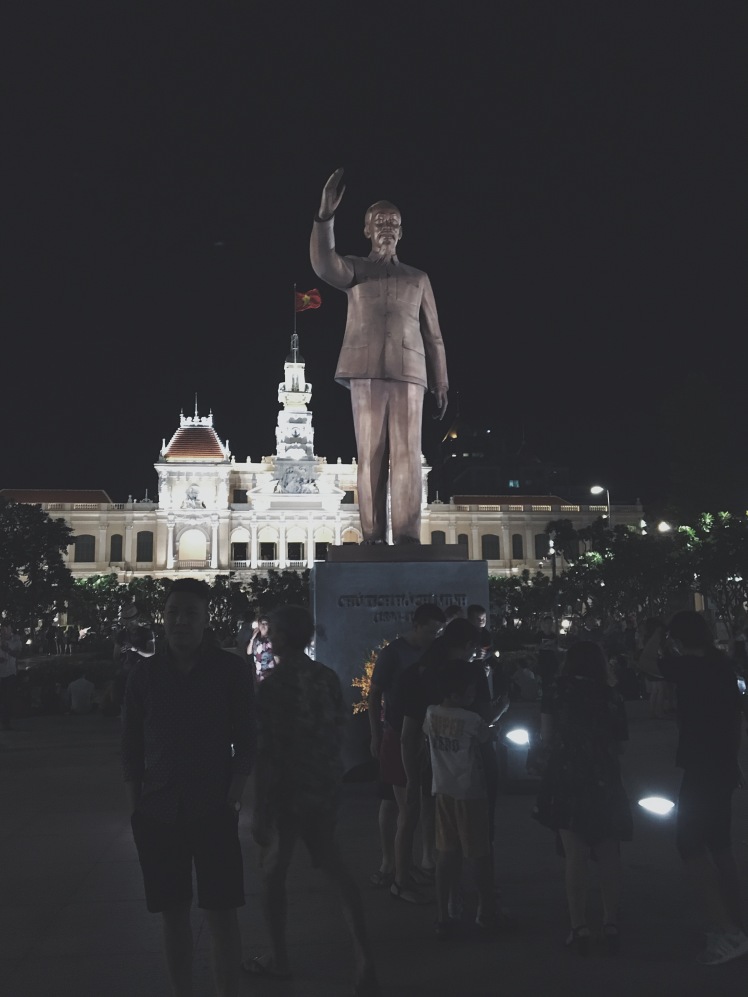 Debate regarding political systems is inevitable, but treatment towards the people is what everything boils down to. So as long as citizens are satisfied with their freedoms and their privileges, then the country is indeed at a healthy state. Of course, Vietnam has modernized drastically from its Communist government, hence living here is much more pleasant than it would be decades ago.

Do you drink milk after it’s been soaked in cereal? What are your favorite historical monuments?