Cocoa flakes and cinnamon crisps don’t usually compliment protein and fiber. Or do they???

Starting around the earlier portion of my fitness journey, I began developing these attachments to certain foods that I just could not stop eating. Put me in front of a table with whole grain cereal, whole grain bread, grapes, granola, hummus, anything with heaps of chocolate, and even more indulgent foods such as cookie dough, buttery popcorn, Dibs ice cream bites and candied nuts. Guaranteed, I would have polished the whole table’s worth of food, and I would have said: “That was a yummy appetizer.”

Anyways, I eventually learned to control myself and my portion sizes with these foods and many others by taking them out of the house temporarily before introducing them back into my diet. Some binge-foods such as granola and cereal were treated as condiments rather than full-blown meals. But thanks to certain new food products, I can enjoy a heaping bowl of cereal regularly!

This is where Enlightened comes to play. If you have followed my blog since the beginning, you may or may not have read my reviews of the Enlightened peanut butter ice cream bars and sea salt caramel ice cream pints that I’d enjoy before going vegan. BUT, have you ever had a high protein cereal? And one that is protein powder free and contains whole foods? I’m sure that many of you have, but I can truthfully say the Enlightened is a unique treasure of its own. Made from broad beans, Enlightened broad bean crisps come in a wide variety of savory flavors such as sea salt, Sriracha, garlic and onion, wasabi, and two sweet flavors of cocoa and sweet cinnamon! Can you guess which one is my favorite? (Hint: the last two!!)

Below I’ve evaluated each bag of broad bean crisps based on their individual flavors and versatility. Texture-wise and nutrient-wise, they are the complete same. The broad bean crisps are very dense, crunchy, and tough to break into. Their density accounts for their ability to remain crisp and solid when soaked in something like almond milk or a protein shake, unlike most cereals, which become soggy over time. For each bag–NOT serving, entire 3-3.5 ounce bag–there are 300-350 calories, 9-10.5 grams of fat, 48-56 grams of carbohydrates, 18-21 grams of fiber, and 21-24.5 grams of protein!

And guess what? Each bag is gluten free, soy free, sweetened with Stevia, vegan, protein powder-free, and nut free (though they do process in a facility that processes peanuts and tree nuts)! How amazing is that?! 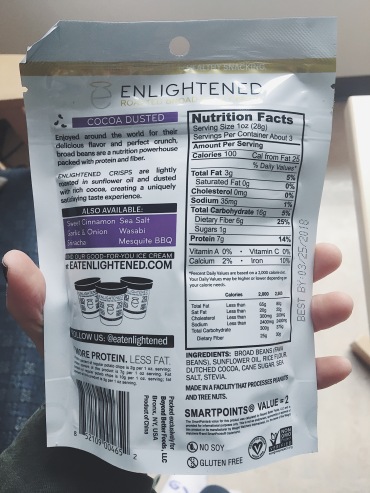 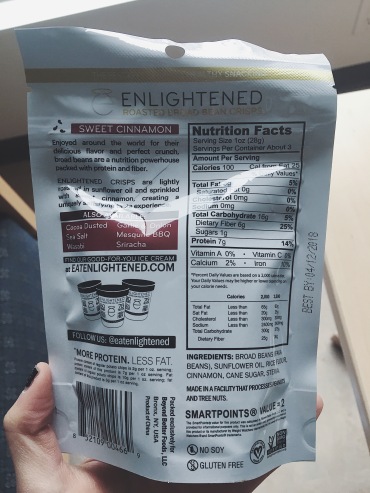 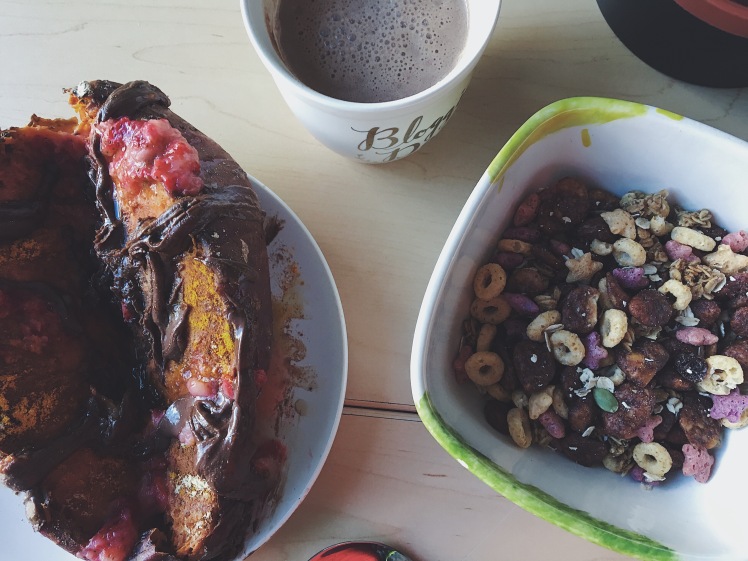 I adore the flavors and the way the rich cocoa or sweet and spicy cinnamon blend in with the almond milk or protein powder “milk” I use in my cereal bowls. The texture of the broad bean crisps are very dense, crunchy, and tough to break through. Unlike most cereals, they maintain their shape and composition much longer when soaked in milk. If you don’t like soggy cereal, then this is perfect!

I find that a whole 3-3.5 ounce bag is a perfect meal for my breakfast cereal. Can’t think of anything more satiating than the abundance of fiber and protein! However, you can also mix in your own cereals, granola, fruits, plant milks, and many more for an even more complete breakfast. And let’s face it. If we go overboard, we could eat up to a thousand calories worth of granola in one sitting, which I’ve done far too many times!

On the contrary, they are also wonderful on their own as a trail mix, late-night dessert or an afternoon snack. In this case, you might want to stick to one or two servings for a smaller meal instead of the entire bag!

The sweet flavors of the broad bean crisps are much harder to find in stores and usually only come in single-serving packs. This means that they are usually only available online at $4 or a bulk price of $48 for twelve bags.

It is extremely hard for me to select a favorite flavor, because it really depends on my mood. In all honestly, I absolutely adore both the cocoa dusted broad beans and the sweet cinnamon broad beans equally for their own flavors and versatility. They are free of many allergens, are macronutrient-dense, and taste fabulous!

These broad beans have seriously become one of my top favorite vegan food products of all-time, and if I had the ability to consume a bag every single day, then I would and be more than content! Whether you’re a savory or sweet flavors fanatic, check them out, and you will become obsessed!