Not a single day has passed by with the vision of myself as a junk food vegan prior to my dietary changes. Until now. Me, the most headstrong, discipline and will-powered individual that I personally know, one who lost more than thirty pounds, survived a juice cleanse and exercises 99% of the year, became a junk food vegan. If it happened to me, then it happens to nearly every single vegan newcomer.

The question is, why did it happen to me? The answer is relatively easy, actually! First of all, being introduced to the college lifestyle ignited me to avoid the Freshman 15 at all costs. No Waffle Wednesdays. No free pizza. No late-night beer. No Red bull. And avoiding all of that was darn easy, not just because they weren’t vegan, but because even if vegan options were offered, I couldn’t afford to let myself go at such a time.

My diet was based off of completely whole foods. Lots of vegetables, sweet potatoes, beans, tofu, whole grains, leafy greens, nut and seed products, and some vegan treats that were used as condiments rather than snacks or desserts. My college town in itself has a limited handful of vegan restaurants and options that my schedule never allowed me to visit. Studies kept me on my toes, completely occupied from even thinking about visiting the newest vegan hotspot in town. This path undoubtedly led me to success. However, the anticipation for returning home, the city of vegan abundance, could not be stopped.

Stepping off of the train and feeling my feet touch the concrete of Los Angeles felt like the equivalent of dipping my feet in a warm fish pedicure bath where the garra rufas eat the dead skin, tickling away and away. Nothing felt more amazing. Finally, vegan heaven, I have returned. I instantaneously pulled out my restaurant bucket list and set eyes on the most practical destination.

Restaurant hopping began the next morning. I drove straight to one of my favorite vegan-friendly Indian buffets and stuffed my belly with the most delicious soy chicken tikka masala, chana masalas and eggplant curry–three times in a row. Inevitably, I dragged myself into food baby mania and got stuck with a Buddha belly for several days. One restaurant off the list, complete. 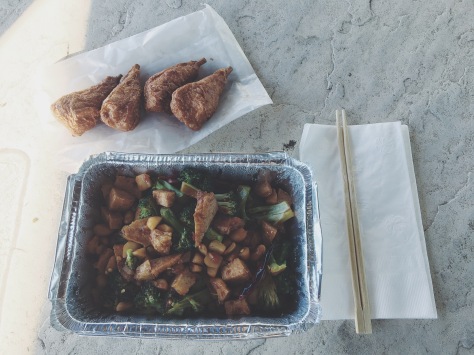 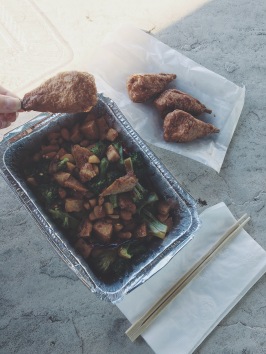 The preceding two days were a little better because I ate more fresh vegetables, sweet potatoes and home-cooked meals. However, right after, I hopped back on the fast food wagon and ordered vegan Chinese takeout, which by the way, is always covered in heaps and heaps of salt and oil. Indulging in vegan kung pao chicken was already incredible, but the veggie “chicken” drumsticks was a completely separate sensation in itself. The thickness, chewiness and umami qualities of the “meat” felt so satisfying to bite into and I yearned for more. 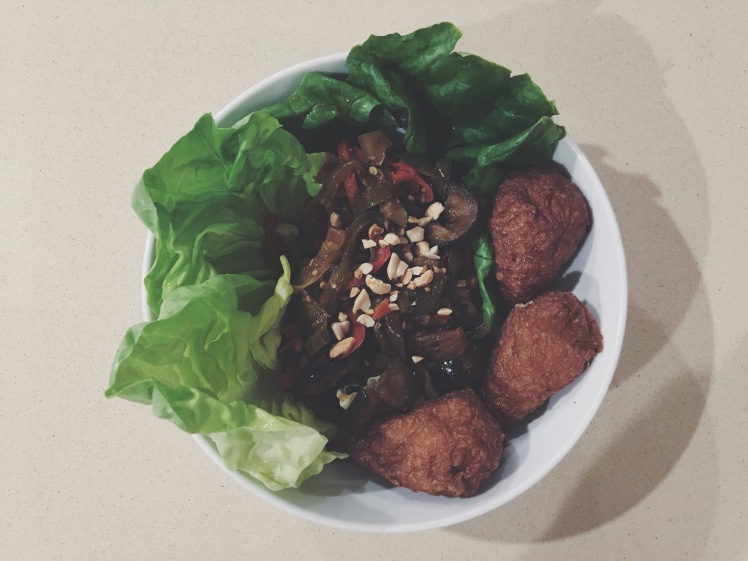 Of course, I had to annihilate the rest of the drumsticks for dinner the same evening! 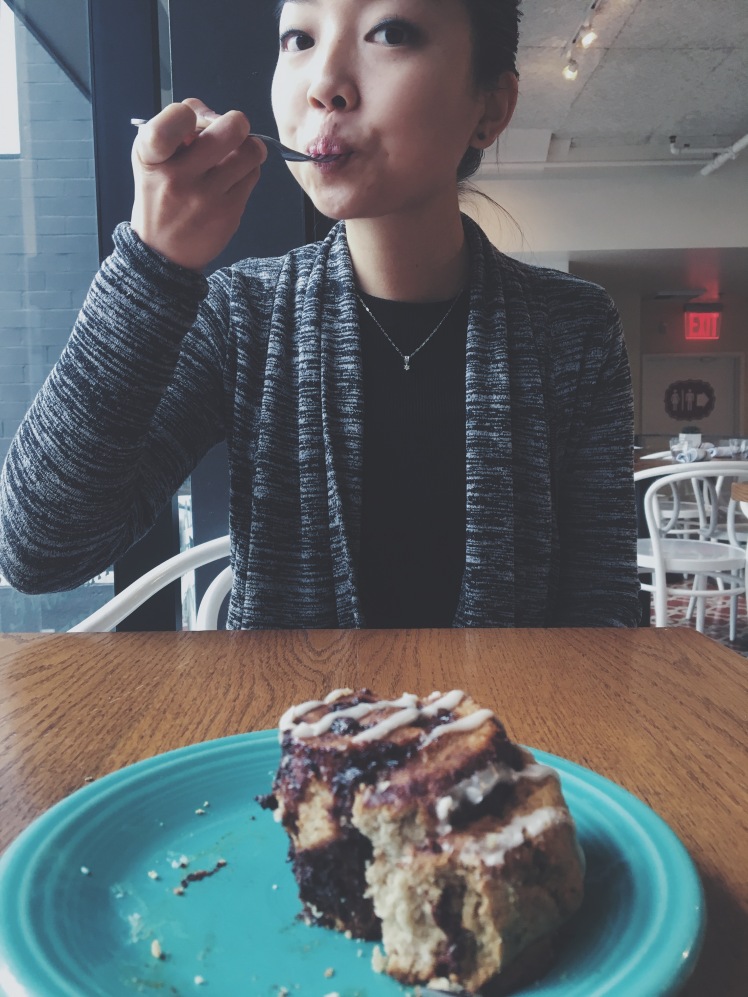 And let’s not forget my visit to Cafe Gratitude, shall we? If you haven’t read or recalled the recap, I heartily enjoyed the restaurant’s Serene cinnamon roll for my pre-brunch treat. Sure, I could release some off the guilt because I split it with my sister and we had leftovers to take home, plus the brunch components themselves were quite healthy being full of plant-based whole foods. But I could have easily passed.

Drumroll, if you please, for the grand platter that landed me the title of a junk food vegan: Vinh Loi Tofu‘s vegan nuggets and tofu french fries! As much as I wish they did, the tomato and butter lettuce could not cancel out the oily deep-fried coating of the nuggets as well as the corn syrup from the ketchup. Driving in the windy cold to purchase my food was indeed quite the hike, but after first bite, I had no regrets whatsoever. The nuggets tasted miles and miles better than any other chicken nugget I’ve ever had in my life, plus the tofu fries yielded the perfect texture and flavor with the ketchup and Sriracha sauces, especially when wrapped in the butter lettuce! Any McNugget had NOTHING on these bad boys. I mean, I could say that this meal was packed with protein, but it was also packed with a crazy amount of oil and added salts! 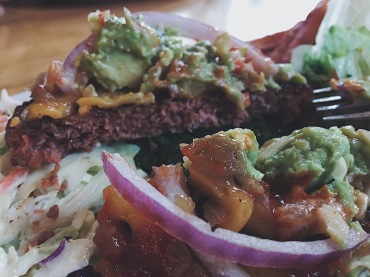 Wait a minute. The Beyond Burger counts as a healthy meal if you take off the bun, right? Cancels out the Follow Your Heart American cheese, house made sauce and sweet potato fries that I pulled from my dad’s plate, right? No? Well then, that still doesn’t change the fact that upon slicing into the Beyond Burger patty, I was absolutely shocked that the texture resembled the meaty tenderness of actual beef, not to mention that the taste and the flavor scared me out of my pants silly because I thought that I was being fed the REAL DEAL. Same story with the American cheese too!

What prompted me to stop bouncing off the streets of Los Angeles, might you ask? Well, for one, my parents bought groceries that needed to be eaten. But for the other, my taste palette became more and more desensitized as I consumed stronger-tasting and heavily refined foods. What I thought was sweet became duller and I needed more Stevia to feel satiated. My usual level of saltiness experienced the same decline as I upped my salt intake by storm. But most of all, the aftermath of eating such unhealthy dishes gradually hit me blow after blow, whether it was an uncomfortable wrench in my gut or a food coma that lasted for hours.

Yes, I admit that I went a little crazy, maybe a whole lot of crazy. Yes, I admit that I regret going after all of the restaurant food at such a fast pace. Yes, I didn’t like that I started breaking out on my face and holding extra water weight. Yes, I felt quite sick and sluggish after the heavily-oily meals. But no, I didn’t suddenly view myself as a failure of a vegan, let alone a fit and healthy person. I have no qualifications of identifying myself as the “perfect” fit girl or health nut, and I’m about to break a major misconception: health nuts crave junk food too! Heck, most vegans, a ton of which identify themselves as raw foodists, fruitarians, juice-cleanse regulars and whole foods plant-based vegans, still crave junk food! I think anyone would have to be awfully special to have never desired a not-so-healthy meal at least once in their whole lifetime.

Here’s a common question that non-vegans and even fellow vegans ask each other: why do we even crave junk food? Well here’s the deal. All human-beings alike evolved from our Paleolithic ancestors, who obviously did not have the same diet as we currently do today. Everything was primarily based off of whatever they could find in the wild, whether it be berries, nuts, seeds, herbs, fruits or vegetables along with trace amounts of meat and insects. With the agricultural era came the evolution of growing crops, domesticating animals and attempting to produce food for a larger population. Eventually, we hit the Industrial Revolution, which prompted the need for convenient, quick, easy and cheap food, thereby initiating the birth of functional and processed foods, widening the food production scale, increasing the use of quick-working factories, and stretching the consumer’s knowledge of where his/her food comes from.

Despite this dramatic evolution, we humans have retained the primal instinct and sensitivities to hunger as well as the need to satiate that hunger for survival. However, a hunter-gatherer reaching for a piece of fruit in the wild will not experience the same post-meal sensations as an office job-worker reaching for a candy bar. Clearly, one of them will gain a wide array of health benefits and the other a sugar spike. But with convenience and cheapness by our sides, how could we resist a $1 chocolate bar while organic strawberries can cost up to $8? 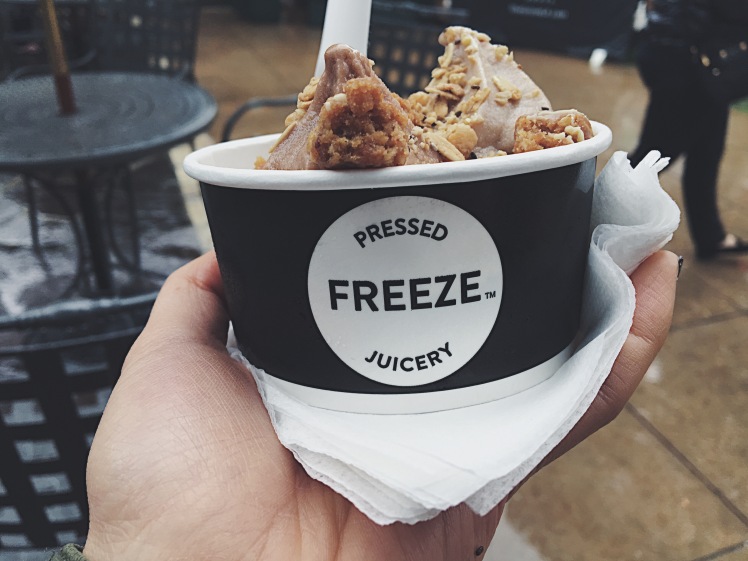 At the end of the day, I, along with many other junk food fanatics, am aware of what I put into my body. On the other hand, I personally have enough knowledge about my health and well-being, and have lived too rigid of a routine full of exercising religiously, stuffing greens in my stomach like squirrels collect acorns in trees for the winter, and have been too deprived of time from studying and working to miss out on anything. By the beginning of my winter quarter, I’ll be back to square one. Hit the gym every other morning. Eat salads and sweet potatoes. Sneak in +20K steps a day. Shove my fist in the air and say: I fucking killed it.

Ever been guilty of falling off the health wagon? What was the most indulgent restaurant dish you’ve ever eaten?

2 thoughts on “Confessions of a (temporarily) Junk Food Vegan”