I was always somewhat of an isolationist at heart, quite similarly to the way foreign policies work where a country chooses to bar its borders and not interact with any other countries around it, except I did that with people. Never did I ever attend football games, concerts, festivals, dances besides Homecoming and prom, fundraisers, and many other events my high school hosted aside from a select few that I can count on only one hand. I seldom did the same outside of school unless if I were to meet a social media celebrity. It wasn’t that I feared chatting with people. In fact, I loved striking a conversation with someone and learning about that individual!

The truth of a matter is that I actually felt so apathetic towards putting myself out there in social outings. The more my apathy for going out got the better of me, the more reclusive I became and the less I enjoyed life. Every day became the same: wake up, exercise, drink green tea, cook food, eat breakfast, blog and surf the web for a few hours, maybe join my parents while they run errands, eat lunch,  surf the web some more or edit videos, go out to dinner, hit the hay. Imagine if that schedule were to repeat itself for an entire year–that would mean a year of meeting nobody new and exploring and learning nothing new. Wouldn’t that be so boring?

Unfortunately, that’s how I lived my life for months and months during school, all while I witnessed my classmates attending these shopping sprees, crazy parties, movie nights, romantic dates and study nights that turned into sleepovers. Social media wasn’t a huge help either–I’d scroll through an endless feed of photos that captured sunny beaches, drool-worthy brunch dates, fancy hotel suites, celeb meetups, rowdy sports games, colorful festivals and classy fashion shows. Sure, I’d crack by 11 P.M. and sleep through more than half of a rock concert, and I would much rather spend a night at the gym than get red-in-the-face wasted at a trashy Halloween party. But at the same time, I wasn’t making the most of my life when I was already independent and old enough to do so. I was so grateful to have graduated in high school because I finally had the time and freedom to not worry about exams and papers, but I was also devastated that the opportunities for me to get to know more people in my senior class were all gone. After reading a few summer campaign articles on the Internet, I realized that I suffered from FOMO, or the fear of missing out, which is something I am sure that a lot of you have all experienced as well. I dreaded feeling left out but was also unmotivated to initiate anything that would change my reclusiveness.

Obviously as a broke 18 year-old with a part-time job and financial dependence, I can’t just book a plane ticket to Bali and expect to live the magical life I see on Instagram. However, I know that life is what I make of it if I just open myself up to new experiences and new ideas. People dance excitedly at a grocery store and people yawn at Drake concerts. It is just a matter of perspective. I always promote stepping out of your comfort zone and trying to reach new heights, but it was hypocritical of me to say this and not do the same for myself in terms of my social life. It is one thing to genuinely show no interest in an event (ex: getting wasted at junior-senior parties) but it is another to remain in a safe little bubble because you’re scared, and the latter was my most frequent excuse. I never would have thought that I would love attending conventions and group workout classes! Just like my weight loss journey, I’ve reached a place in my life that I once thought was impossible. In this case, it’s surrounding myself with strangers in new events and places!

Let me introduce you to GOMO: going out more often. I recently became part of the GOMO project which is being run by Eventbrite. I decided to join in because I am pumped to make the best of my summer and am sick of being confined by FOMO, which I’m sure a lot of you guys are as well. From GOMO, I’ve learned that we can’t just rely on social media and Netflix to illustrate our ideal lives–we have to go out, be our own artists and create what we want to experience! 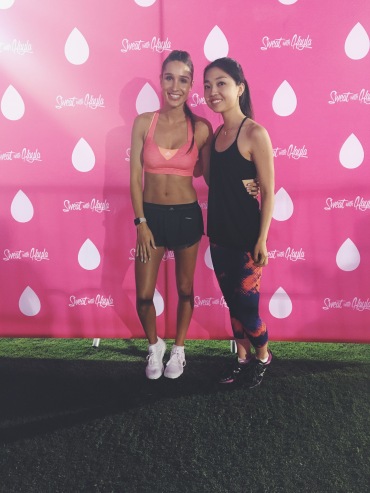 The Eventbrite website serves as a widely inclusive and communal platform and works like an interactive calendar and planner where you search up all kinds of music festivals, markets, art showings, panels, seminars, exhibitions, tastings, and classes pretty much in any location. If you have an account, you can save anything that peaks your interest, buy tickets, and even create your own events!

What I truly love about Eventbrite’s message is the fact that we have to disconnect ourselves from social media in order to bring ourselves closer towards our goals we have from social media. Because I decided to live out the GOMO mantra, I actually got to attend one of the funnest group workout classes, make new friends and meet some of my biggest inspirations, including Sophie Gray and Kayla Itsines! If you’re a fitness junkie like me, just admit that you’ve always wanted to be one of those attendees following the instructor’s routine in a group setting, whether you’d look like a fool or not.

What can you count on me to provide for you with GOMO? Well, let’s just say that I now have so many wonderful plans coming in the near future! I have to keep things a secret for element of surprise, but for now, picture vegan barbecues, food festivals, night markets, meetups, yoga classes, restaurant hoppings, fitness conventions and more that even I don’t know of yet!

I’m not saying that you have to buy pricey tickets for parties and gatherings that don’t really peak your interest. What I’m saying is that you need to open yourself up to trying new things. Explore that outdoor mall you pass by on the way from school or work. Have a meal at that exotic hole-in-the-wall Mongolian restaurant next to your go-to pizzeria. Sign up for that weekly morning yoga class instead of sleeping in that Sunday. You will be so surprised as to how much pleasure and excitement in your life will arise simply by going out and doing something new every day. With GOMO, you will truly learn how to live in the present and embrace the unexpected!